Note: I have changed the title of this post from "Mormons Celebrate Bigotry" to "Prop 8 Supporters Celebrate Denial of Rights" because I think it more accurately reflects what is depicted in the phot and because the old title was unnecessarily provocative and unfair--not all Mormons supported Proposition 8, and many who supported it did so grudgingly.

The Some Mormons, while mourning the Obama Presidential victory, are nonetheless celebrating the passage of Proposition 8 in California, which enshrines in the California Constitution discrimination against a minority of California's population--gays and lesbians, whose marriages will no longer be legally recognized in California.  The These Mormons, including those who live in other states (such as Utah), were energetic and enthusiastic in working to deprive gays and lesbians of their right to marry.  In working so hard to pass Proposition 8, the some Mormons continued a long tradition of their religion to oppose civil rights.  In the 1960s, LDS leaders spoke strongly against civil rights for African-Americans, opposing integration and supporting politicians like George Wallace in his efforts to maintain "segregation now, segregation tomorrow, and segregation forever."  LDS apostles argued that segregation was God-inspired, and that to end segregation was to act against God.  For example, Elder Mark E. Petersen of the Quorum of the Twelve Apostles said in 1954 that:

Now we are generous with the Negro. We are willing that the Negro have the highest education. I would be willing to let every Negro drive a Cadillac if they could afford it. I would be willing that they have all the advantages they can get out of life in the world. But let them enjoy these things among themselves. I think the Lord segregated the Negro and who is man to change that segregation? It reminds me of the scripture on marriage, "what God hath joined together, let not man put asunder." Only here we have the reverse of the thing - what God hath separated, let not man bring together again. (Apostle Mark E. Peterson, Race Problems - As They Affect The Church, Convention of Teachers of Religion on the College Level, Brigham Young University, Provo, Utah, August 27, 1954)

The LA Times ran this photo of [some] Mormons [and others] celebrating their "victory" in denying gays and lesbians their constitutional rights: 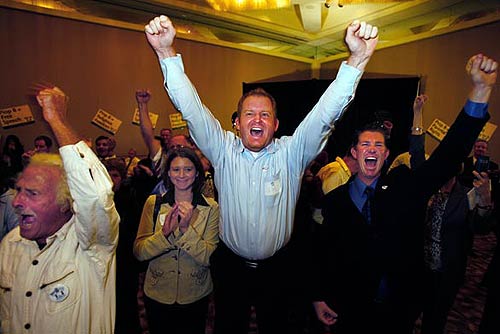 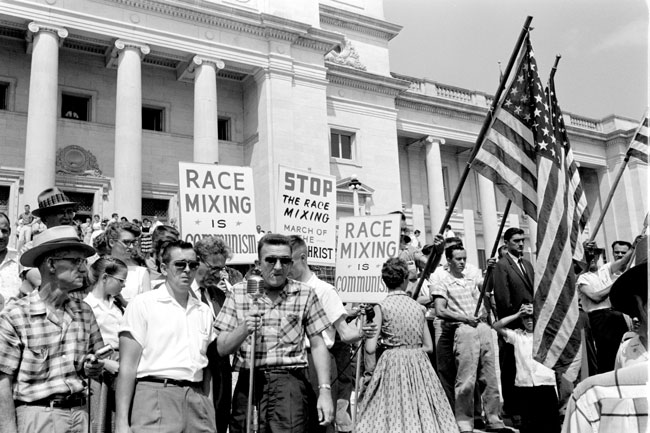 I hope Mark E. Peterson and other General Authorities who said similiar derogatory remarks about African Americans are rolling in their graves and weeping and wailing and gnashing their teeth!

Is this older photo from Utah? It looks like it could be a Utah Co. or SLC building. And the signs fit.

I think that photo was from Arkansas. Probably no Mormons in it. But I am sure Ezra Taft Benson would have been quite comfortable with those gathered on the steps in that photo.

the signs may fit, but the two women in their "immodest" sleeveless tops don't. :')

Those last two pictures say it all.

I'm embarassed, ashamed, and hurt by this from the church of my ancestors and my youth. I'm now an ex-mormon, but growing up gay in that church was it's own private hell. And knowing that my family and few mormon friends all supported this discrimination just makes my heart ache. They just don't understand. The church binds them with blind obedience ... most of the members cannot see, and don't dare try to see beyond what the church leaders tell them.

As for the church leaders ... there's a special place in hell reserved just for them.

Also - I just recently saw a talk about "strapless" dresses from Spencer W. Kimball from 1961. I wonder if mormon dress codes were less strict (about sleeves vs. sleeveless) when this photo was taken? Was the second photo taken in Washington D.C. or in front of the Utah statehouse?

Ashamed? To have preserved marriage? Nope.

I suppose you are as proud of preserving marriage as the folks in that black and white photo were proud to be preserving the "white race." Congratulations.

I suppose you are as proud of preserving marriage as the folks in that black and white photo were proud to be preserving the "white race." Congratulations.

i'm confused. how would expanding the realm of marriage not preserve mine of 35 years?

I just wanted to say, generalizations rarely accurately portray anyone real individuals views. I did not support Prop 8 - after considerable study and thought could not come to an understanding of how and why gay marriage would harm me or society. And I have been smiling all week that Obama is our president. SO, not all "the Mormons" mourn and rejoice for the reasons you think. This is my first time stopping by ... prompted by your comments over at Connor's Conundrums. But now I'm not sure if you're trying to be open minded and debate logically ... or just antagonistic.

I posted an essay on Prop 8 by a San Francisco attorney over on my blog. http://intj-mom.livejournal.com/#item21895

A Mormon friend of mine (who is thinking about resigning now over this whole Prop 8 mess) told me that Monson recently said in a talk that the Mormon church would "no longer hide behind the Halloween mask of tolerance." Sounds like a very loaded statement, IMO.

And someday, history will be rewritten. The Church will note that it never gave institutional money, and profess "that's all behind us now."

It will break my wife's heart and may break my marriage, but I cannot in good conscience stay a member of the Church any longer.

If anyone has resigned prior to this month over this issue, there is a form on that page entitled "Already Resigned" that we would appreciate your filling out for the same reasons.

That page also has a link to the MormonNoMore website with sample letters and instructions on resigning, etc.

Apparently there's a new Facebook group for Mormons entitled "The Last Acceptable Prejudice". LOL. How many groups think they are the last acceptable prejudice? I did a Google search and there are quite a few pages, haven't seen anything referring to Mormons yet, however. A lot of stuff claiming that anti-catholicism, Down's syndrome, or obesity - as well as homosexuality - is the last acceptable prejudice.

I think the reason so many people get pissed off at the Mormons in general is because of the general attitude of arrogance and the double standards. Many, including the leadership, seem to have this "we're right and because of that anything we do to get our way is ok" mindset. The ends justify the means.

As for double standards, let's look at D&C 134:9 for an example:
“We do not believe it just to mingle religious influence with civil government, whereby one religious society is fostered and another proscribed in its spiritual privileges, and the individual rights of its members, as citizens, denied.”

Or how about this excerpt from the April 6, 1942 1st Presidency message: "We believe that religion is instituted of God; and that men are amenable to him, and to him only, for the exercise of it, unless their religious opinions prompt them to infringe upon the rights and liberties of others;...the civil magistrate should restrain crime, but never control conscience; should punish guilt, but never suppress the freedom of the soul".

Those both seem pretty clear to me. It seems like many Mormons think these scriptures & statements (1st presidency message is "modern revelation" right?) only apply when another group wants to try and restrict the Mormons' rights & freedoms but not vice versa.

And then they can't understand why a lot of people have a problem with them...

I have to wonder if Thomas S. is yet feeling any sting of regret for having opened this Pandora's box. How does the Lord's true prophet back out of this one???

I could not agree more. What is hilarious is the predictable move into "persecution" mode by some Mormons. They went out of their way to take away rights granted by the state of California, and they expect no one to harbor any ill feelings toward them.

What a shameful episode (one of many) in Mormon history.

I don't know if I would call sexual sin limiting freedom. I would be frustrated also if I couldn't legally fornicate. WHAT ARE YOU KIDDING ME??? It is man and woman. Adam and Eve, not adam and steve. Can't you see how perverted homosexuality is? How can you intelligently believe that it is a civil right? Why don't we legalize murder and theft? Homosexuality is killing the soul and stealing the light of Christ. Also I hate to burst your bubble but LDS Saints don't make up for the majority in California. Which means other normal citizens voted as well.

The wicked take the truth be hard...

Thank you, The Smart One of ALL You, for commenting on my blog. The brilliance of your reasoning is blinding. At least you are honest in stating that your opposition to the legal recognition of loving long-term relationships among gay couples is motivated entirely by a desire to enshrine in civil law your particular interpretation of biblical principles. Because you believe God created "Adam and Eve" and not "Adam and Steve" you want to deprive gay couples of the same legal standing that straight couples enjoy under our secular system of government. You want your personal religious beliefs to govern the lives of those citizens who do not share your beliefs. In this, you are aligned with the Mormons who seek to do the same. The difference is that you are at least up front about it.

The comments to this entry are closed.